How LeadIQ Doubled Their Response Rates with Video

In their own words, LeadIQ is “where your next deal starts.” A prospecting and sales enablement company, they create solutions which make it easy for Sales Development Reps (SDRs) and Account Executives (AEs) to find data online and use it to reach out to prospects more efficiently.

So Many Sales Tools, So Little Time

Cole Fox, Chief Sales Hacker at LeadIQ, wants the same thing all salespeople do: to close more deals. His team is especially focused on improving response rates and prospect engagement in order to meet their sales goals.

Working for a sales enablement company, he knows better than anyone that choosing the right tech stack is key to his team’s success—but figuring out the right tools for the job is challenging in a market saturated with salestech. “There are so many workflow enhancements, and tools out there that can help with common sales issues. I think it’s a matter of choosing those right tools that are available to us today as sales leaders,” says Cole.

Double the response rates are a typical result when we add in video, compared to when we’re not adding in video or video media

Vidyard fulfils Cole’s requirements by improving engagement and building more human connection with prospects. Vidyard has been built using Amazon Web Services, enabling the sales teams to see who is interacting with their videos in real time and enabling better follow-up activities.

“I think video can be used as an enabler for a lone salesperson, who normally would have to wait for marketing to send them a video,” he says. “So, what we’ve been able to do with Vidyard is to enable our sales team to take initiative.”

That’s not to say that getting his team on board with video wasn’t without its challenges. “A lot of people, even if they’re an extroverted salesperson, go ice cold as soon as they’re on video,” Cole says. His solution? Gradual exposure. He and his team would practice by recording a video each day—no pressure to be perfect or even send it out to prospects. This tactic has been incredibly effective in getting his team warmed up to video. “It’s taken the fear of the unknown out of video. My team now knows that they can be casual and genuine.”

Since getting comfortable with the medium, his team members have been inspired to use video for everything from cold prospecting to educating potential customers who are further down the funnel.

“It really shouldn’t just be stopped at prospecting,” explains Cole says. He says that now when his reps get questions about product features they can just record a quick Vidyard Chrome extension screen share for their prospective customer and email them the link. “It’s really an enabler for both sides.”

And when it comes to getting higher response rates, and ultimately, more deals? Everything’s coming up LeadIQ.

How a top performing rep got there with Vidyard

Check out how one LeadIQ rep got creative with video by singing to her prospects. She wrote songs about the product and her response rate was amazing.

The specific benefits for Cole and his team? “We’ve seen a lot of success. Higher response rates, increased deal sizes, and faster time to close,” he says. “As a sales leader, I love that.” He also notes that double response rates are typical when his team sends video, as compared to other forms of communication.

His team has had particular success using video for conference follow-up and for reviving dark deals. For instance, Cole’s team used video to send follow-up messages after a recent conference, earning them a response rate well into the double digits. He attributes this success to video, saying “when a prospect sees you onscreen, you’re not just a salesperson reaching out anymore. It shows you’re human.”

Ultimately, by leveraging video throughout the sales process—from prospecting, to education, to reviving deals gone dark—“you’re going to win a lot more deals,” Cole says. “And that’s what we do.” 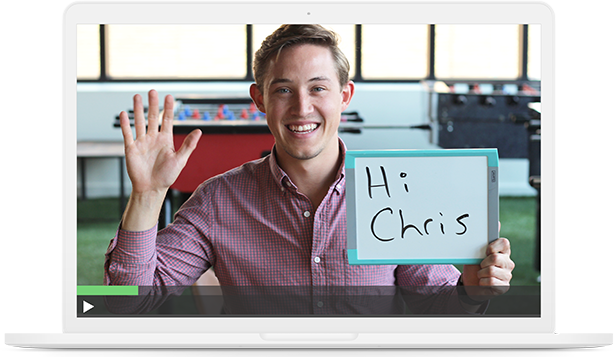 Engaging Hyper-Personal Video Fills the Funnel at This Scrappy Scaleup