It’s harder than ever to get someone’s attention, but personal video is helping sales development teams increase response rates by more than 5x! In this episode of Vidyard Chalk Talks, learn the latest tips for using personal video emails to improve the results of outbound sales prospecting programs.

Formerly an accountant, Terrance traded in a life of financial statements for sales development. When this video was recorded, he led a team of outbound SDRs at Vidyard, where he obsessed over tech-enabled and data-driven sales. Terrance has been told that he has poor taste in music. Check his Spotify history to confirm.

My name is Terrance. I’m a Sales Development Manager here at Vidyard! In this Chalk Talk episode, we’ll talk about the state of prospecting today and how video – specifically, personal video – is going to enable your sales team to get into more sales conversations and ultimately build more pipeline for your organization.

As a Sales Development Manager leading a team of outbound reps, I know it’s harder than ever to get ahold of our prospects over email, and that’s because they’re receiving a hundred emails from a hundred different sales reps every single day. Not only that, when we give them a call on the phone during business hours, they’re not very likely to pick up.

What we found was, by including video into our sales cadence, we were able to interrupt that pattern of the same, old, boring email template. Instead, we showed our prospects that we made video content specifically for them, personalized our outreach, and thus increasing our response rates by 500%.

Put the Person Back in Salesperson

What’s happening here is that video is enabling your sales team to be more personal, more visual, and humanize your team. So, when they reach out to their prospects, they know that they’re human and they’re not sending automated emails out.

By standing in front of the camera and talking directly to them, you’re showing a little bit of vulnerability, but you’re also building familiarity, so when you pick up the phone and give them a call, they know who you are and why you’re calling. Ultimately, what video’s going to do for your sales team is help them connect faster with their prospects and shorten those deal cycles to be more efficient. So, how can you get started with personal video today?

There are two types of videos you can use in your sales cadence. The first video is a webcam video. This is basically leaving a little message in your prospect’s inbox, on-camera, explaining to them your value proposition, your message, and why you should book the next step. When you do these webcam videos, make sure you grab a whiteboard.

Write their name on the whiteboard so they know the video is meant specifically for them. By doing so, you’re going to increase the click-through rate of your video and thus have more prospects actually hear your message!

The second video is a screen capture video. The screen capture video is great because it enables you to connect the dots between all that research you did before targeting this account or this prospect and visualize that specifically for them. So, for example, say you found a great article that was written about the company. Walk them through your thoughts about that article and explain why the contents of that article make them a good potential customer. That’s it!

With these two videos, you can include them in your 10-12-touch sales cadence. What I recommend is you don’t use video on every single step but instead scatter it across your cadence at the beginning, middle, and end. Somewhere at the beginning, you’re going to want to start with a webcam video. Why this is important is that webcam video introduces yourself to the prospect, shows them that you’re human and that you’re not automating your emails. Because you’re including a video at the beginning of your cadence, you’re much more likely to get a response, therefore saving yourself time, instead of having to run through the entire cadence.

The second place you’re going to want to use video is somewhere near the middle. At the middle of the cadence, use a screen capture video and focus specifically on your prospect. Talk them through why they are a good person for you to be connecting with. What I recommend is record their LinkedIn profile and explain to them why their title, role, and experiences make them a good prospective customer.

We talked a lot about video in email, but you can also use video in your InMails or on social channels, like Twitter. What’s important here is that video does not replace these communication channels. Instead, it enhances it. So instead of getting rid of all your InMails, make sure you’re adding video to the InMail to create a better experience for your prospect.

And last but not least, after you’ve sent all these videos out and you get notified that someone’s watched your video, what do you do? At this point, when you get notified that someone’s viewed your video, pick up the phone and make the call. Strike when the iron’s hottest! You’re going to want to call them then and there because they’re likely at their desk and the video is top of mind, which makes it a lot easier to get the conversation started.

So, how do we actually get your sales team started? First, you’re going to want to select a video creation tool that is easy to use and integrated with your existing workflows. With ViewedIt, you can create, send, and track video content directly within your email platform as well as your existing sales cadence management tools and CRM. After you enable your team with ViewedIt, you’re going to want to have them practice, and they’re going to need to practice!

Have your sales team think about video as another tool that they’re going to need to practice and perfect, that way they can continue to learn and adapt from their experiences. Just like cold calling, it’s pretty hard when you start off, but through a bunch of coaching, role-playing, and actual cold calling experience, they’re going to get better at cold calling, and it’s the same thing with video. You’re going to want them to start by sending video internally, get comfortable on camera, then start sending videos out to the prospects, and ultimately reviewing the videos that they sent out to their prospects and seeing where they can improve.

Thank you so much for tuning in for another Vidyard Chalk Talk. See you at the next one! 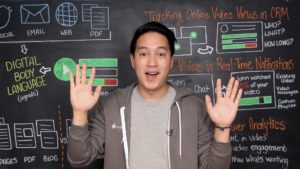 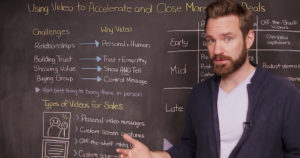 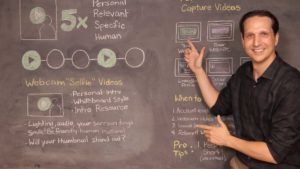