Glenn Hughes, Video Producer at Gordian, explains how the construction tech company uses video across channels (including web, email, and social media) and at every stage of the funnel. He also shares his thoughts on the value of video, why Gordian chose Vidyard, and some of his favorite features.

From planning and design to procurement, construction, and operations, Gordian helps its clients deliver high-quality projects on time and on budget through the provision of groundbreaking construction cost data, software, and services for all phases of the construction lifecycle.

The company serves a wide array of clients, including contractors, architects, engineers, educational institution stakeholders, and facility owners and managers. Its clients span a variety of industries including local, state, and federal government; education; healthcare; manufacturing; insurance; legal; retail; and other industries.

As the saying (sort of) goes, a video is worth a thousand words. This is particularly true when selling and marketing a complex, multi-faceted solution. Gordian, a leading provider of facility and construction cost data, software, and expertise long struggled to find an engaging way to teach prospects about the value of its flagship product, job order contracting. That’s where Glenn Hughes, video producer at Gordian, came in. Hired as Gordian’s first go-to video guy, Glenn joined the marketing team to add a new video-based dynamic to the marketing mix.

“Our goal in marketing is not just to generate marketing qualified leads (MQLs) but to also move the needle by guiding a prospect through the buyer’s journey so we see the impact to our bottom line. We decided video would be the most useful media for achieving that goal. It allows us to humanize our brand, products and stories and it provides us with detailed analytics for tracking engagement,” says Glenn.

Glenn and his in-house production team are responsible for creating high quality, interesting videos for Gordian’s lines of business. Their videos have proved to be one of the most versatile and engaging mediums for sharing the Gordian story. Campaigns incorporating video routinely have higher engagement than campaigns with static assets and video-based assets have proved to be easier for customers to digest and share. As soon as I started using Vidyard, I understood what a great decision it was to use this platform versus something like YouTube to host our campaign.

Use Video to Easily Showcase Value to Potential Customers

In the summer of 2018, Glenn and his marketing colleagues embarked on their first full-funnel marketing campaign using video.

Using a series of five videos, consisting of a one-minute teaser and four gated videos, Gordian’s campaign walks a qualified prospect through everything they need to know about job order contracting, from what it is to how it works, when to use it (using social proof), and finally how to set up their own job order contracting program including contract and bid documents.

Phase one of the campaign was set up as a four-day registration-only event. Registrants received one email a day with a video featuring what Glenn calls “valuable information you don’t want to miss” such as sell sheets, infographics, and eBooks.

Gordian planned the four main videos so that they would help take viewers through the buyer’s journey, with each video dedicated to answering the key questions for the relevant stage: awareness, intent, desire, and action.

In order to capture vital campaign data, campaign content is gated behind Marketo forms with video viewing data captured in Vidyard. This provides the team with a powerful marriage of who and how, and allows Gordian to apply a lead score for MQLs in Marketo based on length of video and percentage viewed.

For video-specific campaigns, if a lead converts on a form and watches a percentage of a Gordian video, the Marketo and Salesforce integrations convert the lead into a Salesforce campaign. The total number of opportunities influenced by the video campaign is tracked within the Salesforce platform.

Phase two of the JOC campaign, underway as of this writing, is conducted in partnership with American City & Country Magazine. Gordian’s prospect database and the magazine’s readership were targeted in this phase and all video content and assets for this campaign were housed in a content engagement center on the publisher’s website which features embedded Vidyard players. The plan for phase three of JOC campaign will duplicate the format of the first phase, however, instead of a four-day registration event, visitors will be sent to a registration page where they’ll be able to watch all of the content on-demand. 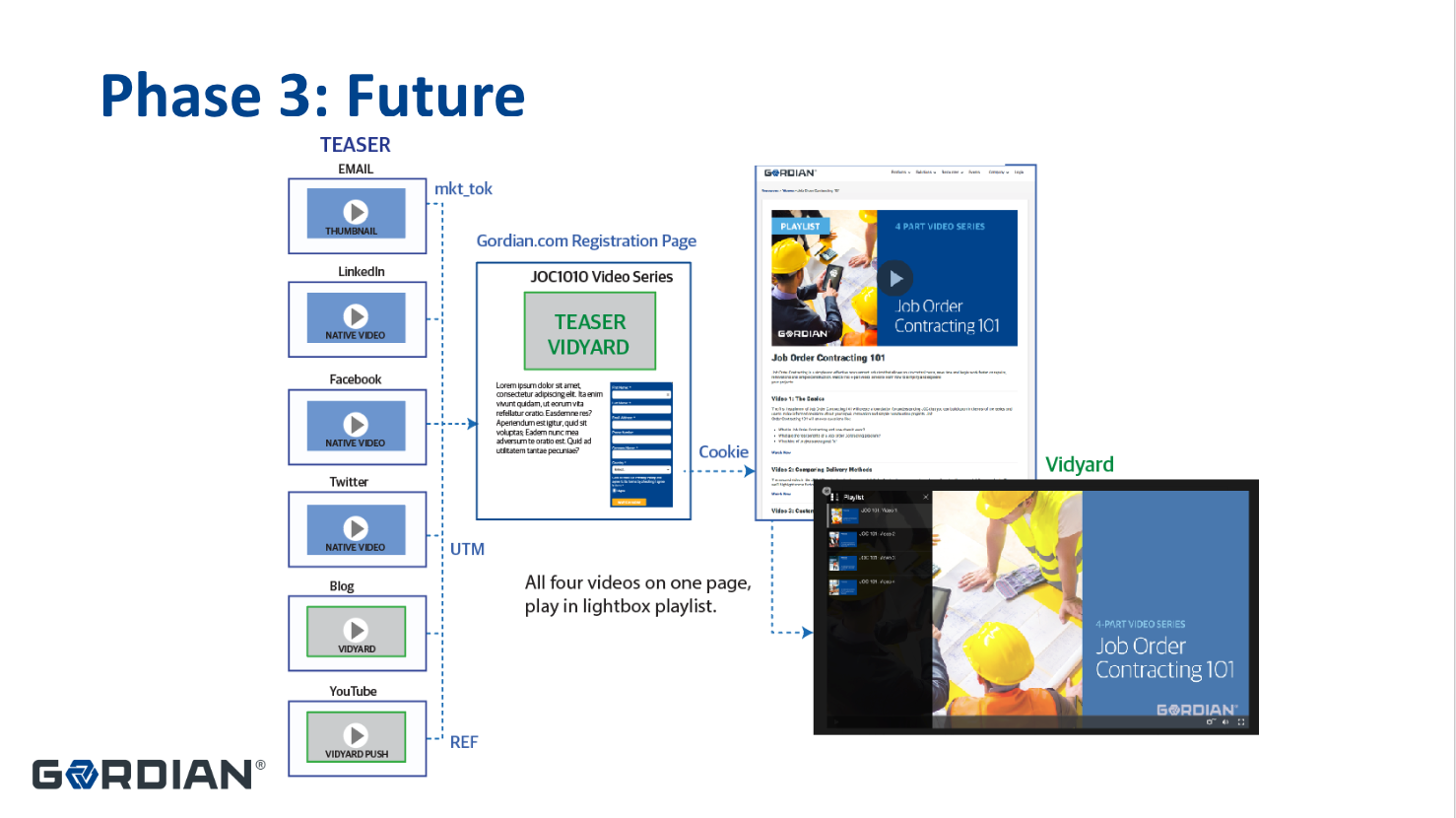 “As soon as I started using Vidyard, I understood what a great decision it was to use this platform versus something like YouTube to host our campaign,” says Glenn.

“As a video producer, I love that I can easily go in and change screens and thumbnails, and even change the video—which means content can be simply refreshed without losing prior engagement statistics. I can also compile different videos into playlists. This allows us to align content and campaigns to distinct market segments and specific problem sets. Incorporating captions into our videos is also super easy with Vidyard. In comparison, half the time YouTube doesn’t generate captions at all and if you can, they are nearly impossible to edit.”

Glenn delves into more detail about Gordian’s entire video-first JOC campaign and how it worked in the on-demand webinar, Unleashing the Power of Video in B2B: How 4 Marketing Teams are Transforming the Buyer’s Journey with Video.

“Our results for this campaign have been nothing less than phenomenal,” says Glenn. “It proved that strategic planning and detailed video analytics can generate a tremendous return on investment (ROI) for the organization.”

Glenn explains, “For tracking engagement, clicks, and views there’s nothing better than Vidyard. Vidyard’s team and platform have delivered critical data, innovative solutions, and exemplary service. Vidyard’s video analytics are accessible to our marketing team in Marketo and to our sales team through Salesforce and are routinely used in team meetings and marketing operations conversations. As a marketing and sales organization, we run on numbers and the numbers we get from Vidyard are super important. Vidyard is indispensable and something we’d fiercely fight for.”