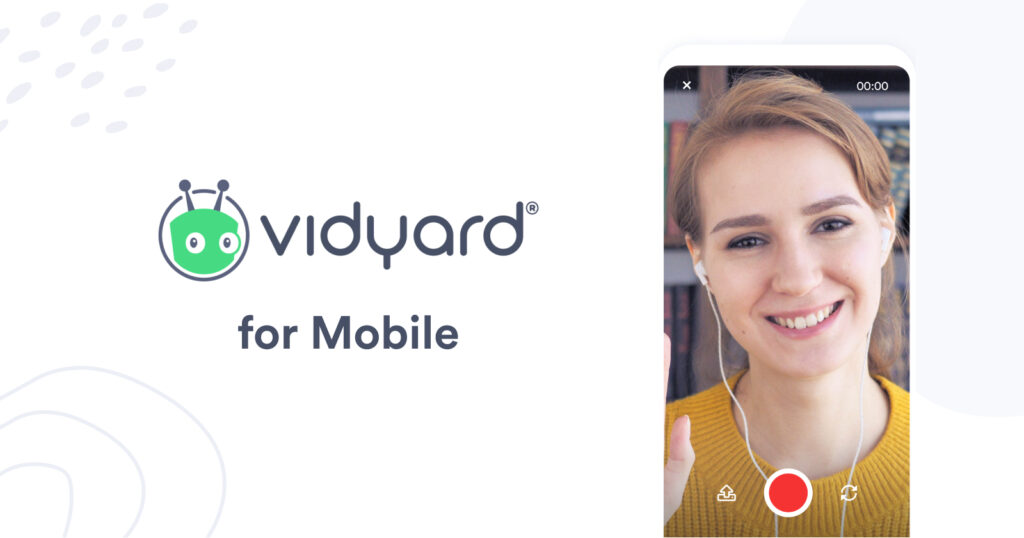 KITCHENER, Ontario. – Aug. 31, 2020 – Amid a 400 percent increase in the adoption of its products, video creation and hosting platform for business provider Vidyard announced today an expansion to the mobile version of its video collaboration and communications tools.

Responding to an influx of demand by business users across all industries and business sizes, Vidyard, already available via iOS and as a browser extension to Google Chrome, has now made its tools generally available via Android to Android’s 1.6 billion users worldwide, as well as a free extension for Microsoft Edge users. These moves closely follow recent updates to its iOS version.

Vidyard isnow available on Android enabling business professionals to record and send personal video introductions, meeting recaps, team updates, and more from their Android device. The Vidyard Android app makes it easy for every employee to create video content without having access to professional equipment, including the ability to:

Vidyard has added 4.7 million users of its video creation, sharing, and engagement tools since March 1, 2020. The addition of Android availability brings Vidyard to a massive global audience of business users, as sellers, marketers, and business leaders continue to look for new ways to deliver their messages remotely. Vidyard for mobile is the easiest way to shoot and share video messages that are timely, authentic, and human.

“In a time of travel restrictions and imposed distancing, the need to stay connected has led to the demand for asynchronous video communication, easy and accessible from wherever and whenever you are,” said Vidyard’s co-founder and CEO, Michael Litt. “By creating an Android app, Vidyard continues a watershed year in which we’ve helped millions of new business professionals become video creators and hundreds of organizations become video-first businesses.”

The global pandemic is transforming the nature of work and has normalized video as the premier business communications tool. More people are working remotely, changing up the traditional approach to shooting videos for an organization. Vidyard makes it easier to supplement text-based emails, workplace chat, and other digital interactions as those become commonplace modes of communication in the absence of in-office meetings. In addition, Vidyard’s mobile apps make it easy for every employee to create and share video content while away from their desks.

The company’s asynchronous video platform has been particularly appealing to users during the recent explosion of video adoption by businesses. According to The 2020 State of Video in Remote Work report from Vidyard and Demand Metric, 94% of study participants now use video-conferencing for work while more than 50% report they’re creating more pre-recorded videos than ever before.

Designed to put the power of video into the hands of every business user while aligning to the security needs of the organization, Vidyard sets a new benchmark for business-grade video hosting, creation, sharing, and measurement while remaining available for free, for everyone.

“Vidyard has enabled us to keep close connections with our employees and customers at a time when a virtual experience is the preferred method of communication for the business world,” said Paul Perscell, VP of Retail Marketing at loanDepot, providers of a seamless end to end digital mortgage experience. “Business will always need to be high-touch, particularly when it comes to home-buying. Vidyard helps us to stay high-touch from anywhere, a capability we’ll be counting on well after the current environment improves,” added Joey Simpson, Marketing Trainer at loanDepot.

The past eight months have been transformative for Vidyard and its customers. Since January, Vidyard has:

“Vidyard’s mobile apps enable professionals to shoot and share business video in seconds – either via text, email, or social media,” said Vidyard’s VP of Marketing, Tyler Lessard. “We’re making it quick and easy for business professionals to use asynchronous video to work from anywhere, fight remote work fatigue, and potentially avoid their next online meeting.”

Vidyard helps businesses and professionals connect with their audiences in a whole new way through engaging, personalized, and measurable video experiences. Through its global video hosting and analytics platform, Vidyard empowers businesses like Honeywell, Citibank, and HubSpot to transform their approach to marketing, sales, and corporate communications. Through its free and pro tools, Vidyard helps any business professional create and share custom videos to deliver their message in a more personal and impactful way. Thousands of businesses and millions of people around the world rely on Vidyard for their video needs. Sign up for Vidyard for free:/free-screen-record As the demand for video in business surges, Vidyard expands its mobile video tools to complement the platform and releases an Android app. Record and share a video by email or text message within Vidyard’s new Android app. Access your entire Vidyard video library from any device, wherever you are.