KITCHENER, Ontario – August 2, 2016 – Video has become the darling of the social media world, but modern businesses are proving that that there are real results to gain from online video content. Innovative companies in both B2C and B2B markets are realizing the power of video to boost engagement with online audiences, and they are increasingly converting those viewers into customers by integrating video viewing data with Oracle Eloqua.

“Vidyard has revolutionized the way marketers use video to not only reach audiences but keep their attention and turn them into customers,” said Ryan Buma, Global Vice President of AppCloud at Oracle Marketing Cloud. “We’re thrilled to see so many Oracle Eloqua customers reaping the benefits of their solutions.”

The world’s largest PC maker, Lenovo, started using video for basic product overviews but expanded to on-demand webinars and personalized video campaigns to drive greater audience engagement. Lenovo adopted Vidyard because of its ability to identify and track individual viewers, see how much of each video they watched and push that data into Oracle Eloqua for better lead qualification and customer insight.

“Video is one of the top-performing assets for us,” said Michael Ballard, senior manager of digital marketing at Lenovo. “Just knowing whether someone clicked play on a video is not a true measure of engagement. Vidyard allows us to score and qualify our audience based on what percentage of each video they’ve watched. We follow up differently with someone who watched a video all the way through – or re-watched it – than someone who turned it off after 10 seconds.”

Lenovo has also used Personalized Video to get more attention amongst B2B buyers. By customizing the video experience for each individual viewer, Lenovo was able to increase click-through and conversion rates by more than 500 percent. Ballard and his team won the 2016 Markie Award at Oracle Modern Marketing Experience for Best Digital Marketing Experience, in part because of the company’s strategic use of video.

MongoDB, the company behind the most popular non-relational database by the same name, maintains a huge library of video content aimed at early and late stage buyers. Video is used throughout their multichannel marketing strategy, making it extremely important to manage, update and track videos centrally using Vidyard.

MongoDB relies on Vidyard to host and manage its video content and enables viewer engagement data to feed directly into Oracle Marketing Cloud to help identify and track the impact of each video asset.

Since MongoDB started using Vidyard, video has become its second-highest opportunity influencer. More than 150,000 minutes of MongoDB video are consumed each month by more than 16,000 viewers.

Bulldog Solutions, a leading full-service marketing agency, has been delivering video marketing campaigns for more than three years to help their B2B clients stand out from the crowd. Using Vidyard’s integration with Oracle Eloqua, they’ve delivered video marketing programs that personalize the content journey and increase conversion rates by more than 300 percent.

“Video is the best way to connect with B2B buyers on a more emotional level and to re-engage dormant audiences,” said Brian Maschler, Chief Creative Officer at Bulldog Solutions. “While email click-through rates are on the decline, we continue to track higher engagement on video campaigns and are seeing a multiplier effect with personalized video. And with Vidyard and Oracle, we’re not only connecting with more prospects, we’re generating insights on both our content and our viewers that help our clients make smarter decisions.”

“Today’s buyers expect video to be part of the learning process,” said Vidyard co-founder and CEO Michael Litt. “Video gets to the point while also engaging audiences in a way that other media simply can’t. By using video in a strategic way, these businesses are learning more about their buyers than they could from any other content, and they’re getting more deals done as a result.”

About Vidyard
Vidyard (Twitter: @Vidyard) is the video intelligence platform that helps businesses drive more revenue through the use of online video. Going beyond video hosting and management, Vidyard helps businesses drive greater engagement in their video content, track the viewing activities of each individual viewer, and turn those views into action. Global leaders such as Honeywell, McKesson, Lenovo, LinkedIn, Cision, Citibank, MongoDB and Sharp rely on Vidyard to power their video content strategies and turn viewers into customers. 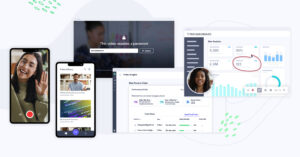